The annual McDonogh Network Awards celebration is organized by the Office of Intercultural Development and College Relations to recognize and celebrate students for their academic achievement, contributions, and efforts in promoting diversity through leadership and education. 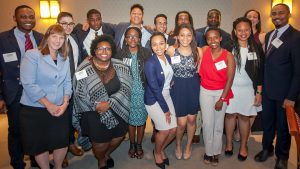 See below for award categories and descriptions

DARLYNE BAILEY ’74 EXCELLENCE IN THE HUMANITIES AND SOCIAL SCIENCES AWARD

A student whose academic/artistic accomplishments reflect an outstanding level of scholarship and advances understanding on an important issue related to diversity.

A senior in the natural sciences or engineering whose academic accomplishments reflect an outstanding level of scholarship.

This award is granted to first-year students studying engineering and science with the highest GPAs.

This award is granted to a successful varsity athlete who has achieved an outstanding level of scholarship.

A student whose creative scholarship in the visual and/or performance arts contributes to knowledge on societal issues of multicultural concern.

A student whose research on important social, political, or economic issues advances knowledge and involves the student in activities within a community.

A student who has worked diligently to promote cross-cultural relationships on campus and/or the community.

Awarded to an accomplished student who is also characterized by noteworthy leadership in college activities and student life.